Thanksgiving holiday is underway | Price of gasoline | US Stocks higher

The Republican tax bill pushed through the House last week while the Senate bill will be voted on after the Thanksgiving holiday. Congress is off for the Thanksgiving holiday, which began Friday. There should be few to no headlines this week on tax reform. The U.S. Stock markets began the holiday shortened week higher, after the Dow Jones Industrial Average and the S&P 500 fell two straight weeks in a row on Friday.

With Thanksgiving travel already underway, motorists will be looking at prices at the pumps before heading out of town. There will be an estimated 45.5 million Americans driving to their Thanksgiving destinations this year, up 3.2% from 2016. The national average price for a regular gallon of gasoline is $2.54, up from $2.45 a month ago. One simple piece of advice, leave earlier than usual to ensure you get to your destination on time and drive carefully.

Just the facts. AAA forecasts nearly 51 million Americans will travel more than 50 miles or more for Thanksgiving. According to the USDA, 244 million turkeys were projected to be raised in the U.S. in 2016. 859 million pounds of cranberries were projected to be produced in the United States in 2016. The president traditionally receives a turkey in a ceremony at the White House a few days before Thanksgiving Day. President Harry S. Truman started the tradition and President George H. W. Bush was the first to pardon the bird and not eat it. In 1941, Congress ruled that the fourth Thursday in November will be observed as Thanksgiving Day and a federal legal holiday. 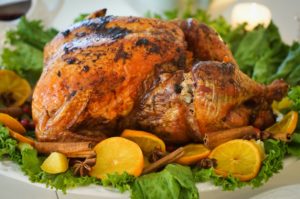