Freddie Mac reports that mortgage rates edged lower this week and remain just below the 4% mark. The 30-year fixed-rate mortgage fell 3bp to 3.92% with 0.5 in points and fees. In November 2016, the rate averaged 3.47% for the month. Low rates continue to be a catalyst for the improving housing sector.

Freddie Mac also reported this week that 2017 is shaping up to be the year for the housing sector in a decade. Low mortgage rates, modest economic growth and a strong labor market are the reasons behind the rather strong housing market. However, a lack of homes for sale on the market led to a stall in the this past summer and fall. It’s unlikely the economic environment will be much more favorable for housing and mortgage markets in 2018 and 2019,” Freddie Mac Chief Economist Sean Becketti said. “We forecast that interest rates will remain low by historical standards, but gradually creep higher over the next two years.”

Fed Chair Yellen said last night that she’s uncertain weak inflation is “transitory.” Transitory, by definition means “not permanent.” Seeing inflation at low levels for a decade brings into question whether relatively low inflation is here to stay. If so, long-term rates like mortgage rates will also remain relatively low. It also means the Fed will not be able to hike the short-term Fed Funds Rate as much as it would like in the future. 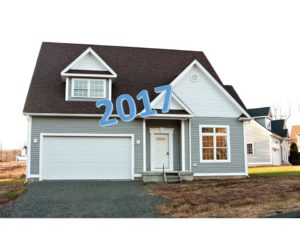